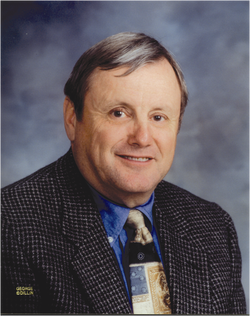 Dr. Robert Elliott was a graduate of the University of Arkansas for Medical Sciences. Dr. Elliott was an avid sportsman and loved the Razorbacks.

He was instrumental in establishing quality imaging and diagnostic services for the women of Arkansas.

Through his leadership in the Breast Cancer Advisory Board of Arkansas Department of Health, standards and quality assurance programs were initiated, with enabling legislation and the regulatory product largely of his design.

As a result, the state of Arkansas now serves as a model for programs nationwide.

Having served as chief of staff at both Central Arkansas Hospital and White County Memorial Hospital, Dr. Elliott had been greatly responsible for the exciting growth and excellence of medical services and facilities in his community.

Having seen the need for radiation oncology services in this area Dr. Elliott welded a broad base of community support and, as a result, Central Arkansas Radiation Therapy Institute located a state of the art facility and radiation oncologist in Searcy, the first such CARTI facility located outside Little Rock.

Although seen as a skilled radiologist, his acumen through a broad range of medicine was notable, with his ideas and advice often sought in subjects far a field from radiology.

A tireless community leader, he had served as president of the Searcy Chamber of Commerce and chairman of the Searcy Industrial Development Commission. Through his efforts high quality industrial growth is a hallmark of Searcy.

Dr. Elliott was a partner in the Arkansas Radiology Group, P.A. in Searcy, and an honor graduate of the University of Arkansas, where he was a member of the Sigma Chi Fraternity.

He was a member of the Trinity Parish Church (Episcopal), where he had served as treasurer, warden and vestry.

Dr. Elliott’s wife, Marilyn and his son, Mark reside in Searcy. Mark has two daughters. Dr. Leigh Anne Bennett, his daughter, resides in Little Rock with her husband, Alan, and their son and daughter. Dr. Bennett is currently a practicing psychiatrist in private practice.

We lost our beloved Dr. Elliott to suicide on January 13, 2001. Our foundation is dedicated to education so that this tragedy never happens to another family!
Dr. Robert E. Elliott Foundation Searcy Arkansas